A multi-stakeholder initiative to develop options for a Digital Dollar

Since Western Union’s first use of telegraph networks to send money in 1871, the basic process of sending money – even with the development of digital technologies — hasn’t changed much. A message is sent via a network containing the payment information and a bank is required, on both sides with reciprocal accounts or other abilities, to fund the transaction. The process can be slow, expensive, and uncertain, particularly if international legs of the transaction are required while foreign exchange (FX) rates fluctuate.

While the process of sending money has been slow to change, the demand for currencies with added functionality to support faster, more certain, accessible, and complex payments has accelerated and central banks are paying attention. More than two-thirds of central banks have been investigating new payment applications, with many of these banks emerging as new potential innovators applying novel technologies, including tokenization, to offer new possibilities to represent and transfer value. For example, the Riksbank, the Central Bank of Sweden, is now the first among leading central banks to have decided to test the deployment of a digital currency (e-krona) in a pilot environment. It’s been reported that China plans to introduce a central bank issued digital currency (CBDC) in the near term and the European Central Bank (ECB) has been actively exploring digital currency features.

But central banks are not the only ones exploring ways to capitalize on the demand for new currency functionalities. For example, the Facebook-supported Libra proposal highlights that private, non-state stable coins may play an important role as a borderless payment medium. Similarly, other initiatives, including digital coins from Goldman Sachs, JP Morgan, MUFG, and Walmart, seek to offer new payment technology and functionality that existing national currencies currently do not provide.

These private sector developments are helping advance innovation, but the time has come to future-proof the greenback by exploring implementation options for a U.S. digital dollar. The principal members of the new Digital Dollar Foundation (The Foundation) have sounded the call for this needed dollar innovation. Together with Accenture, a global leader in CBDC advancement, the Foundation is now catalyzing action by forming the “Digital Dollar Project” (the Project) to study potential avenues to advance U.S. digital dollar tokenization and related implications on the U.S. and global economic and financial systems.

The Project will encourage research and public discussion on the potential advantages of a digital dollar, convene private sector thought leaders and actors, and propose possible models to support the public sector. The Project will develop a framework for potential, practical steps that can be taken to establish a dollar CBDC. It will further explore design options and approaches for creating a digital dollar through a deliberative process, including stakeholder meetings, roundtable discussions and open forums, and be based on careful consideration of core governmental interests, support for existing U.S. Federal Reserve (Fed) related projects, and a focus on a set of key guiding principles. The Project will ultimately seek to identify options for a CBDC solution that enhance monetary policy effectiveness and financial stability, provide needed scalability, security, and privacy in retail, wholesale, and international payments, while ensuring integration with existing financial infrastructures.

The value case for a digital dollar

U.S. central bank money has seen few, if any, innovations since the printing of bank notes during the nineteenth century. Its circulation has remained strictly local and its functionalities limited. Central banks generally issue bank notes for use by the general public and reserves to the banking system.

The Digital Dollar Project seeks to encourage the next major innovation in the U.S. currency: a digital dollar issued by the Federal Reserve System that would enjoy the full faith and credit of the U.S. government and represent a third format of central bank money in addition to bank notes and reserves.

A digital dollar would serve digital financial market infrastructure. To meaningfully expand upon existing capabilities, the new medium should be portable, be sent as easily as a text, and thereby allow settlement irrespective of space and time. It would enhance confidence for conducting digital payment transactions and broaden scope, diversification and resilience in dollar payments.

A digital dollar issued by the Fed would enhance scope, access, diversification and resilience in dollar payments and support retail, wholesale and international payment use-cases:

The Digital Dollar Project seeks to incorporate a wide range of stakeholder views and needs. The Project will aim to offer solutions that can be implemented, including through phases and careful testing, and meet existing performance criteria of U.S. financial infrastructure. Introduction may be partial and could be limited to discrete pilots before broadly rolling out across all use cases. Such an introduction would adhere to the following key principles:

The importance of the U.S. dollar in international transactions is clear—it continues to represent more than three fifths of central banks’ foreign exchange reserves (Figure 1). In no other area will innovation be more beneficial for dollar users, and nowhere will changes to the dollar as a settlement medium be felt more than in the international domain. At the same time, incentives, geopolitical pressures, and even generational preferences to replace the dollar as an international payment medium are significant amid a perceived undue dollar dependence and contraction of international dollar liquidity. China’s push towards a renminbi CBDC is seen largely amid its efforts to advance renminbi internationalization as an effort to do so at the expense of the dollar’s primacy. 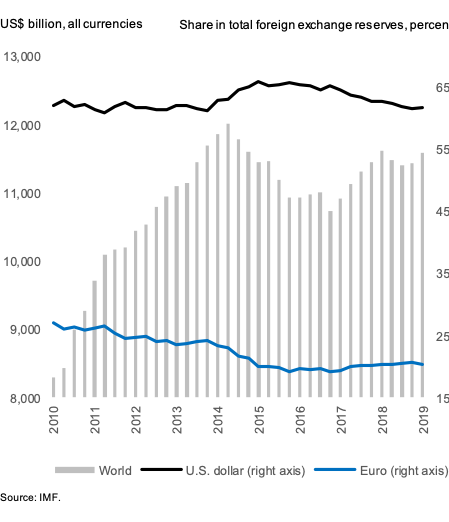 International dollar liquidity is shrinking. The contraction of dollar liquidity, as approximated by cross-border and local dollar credit, in emerging markets and in particular, in emerging Asia raises incentives to seek alternative settlement media (Figure 2). Credit in emerging Asia has contracted from a peak of 6.9 percent of gross domestic product (GDP) in 2013 to 5.1 percent in 2018. This decline also coincided with the share of dollar cross-border credit in emerging Asia falling from 11.9 percent in 2014 to 8.5 percent in the first quarter of 2019. At the same time, the share of the dollar in invoicing is estimated to be around 4.7 times the U.S. share in world trade; in Japan, the share of imports denominated in dollars is estimated to be more than two thirds compared with imports from the U.S. being about one tenth of total imports. The use of the dollar in international transactions also has been accompanied by significant holdings of U.S. portfolio securities, which is particularly true in Asia (Figure 3). Thus, a decline in the international use of the dollar would likely result in a reduction of international U.S. securities holdings which could exert downward pressure on U.S. securities prices and the dollar.

Many central banks have remained cautious about the adoption of CBDC. In part this rests on uncertainty of the effect of CBDC on a central bank’s national financial system and the national economy, and whether CBDC may cause some crowding out of commercial bank monies. There are additional concerns around privacy and security. Wider access to a digital form of central bank money may also be seen with some trepidation although it is already common with bank notes. While concerns about fraud and money laundering can be mitigated by channeling a digital dollar through the U.S. banking system, offshore use of a digital dollar may require additional safeguards.

The possible adoption of digital money by central banks outside the U.S. is considered to be in large part motivated by reducing reliance on the dollar in international transactions. The adoption of a digital dollar in the U.S. is seen as critical to a possible orderly recalibration of the dollar’s attractiveness relative to other digital currencies to support stable international monetary conditions.

The special global status of the dollar implies that any alteration in its issuance provisions need to be assessed and tested with utmost care. Intent and implications must be clearly articulated and understood to guide market expectations about the possible effects of digital dollar adoption. The international role of the dollar may imply that consultation and collaboration with international actors should be considered.

The adoption of a digital dollar as a third dollar format is not expected a priori to alter conduct, provisions for and the effectiveness of monetary policy and financial stability.

The Digital Dollar Foundation and Accenture have formed a core multi-disciplinary team to consider initial designs and proposals for a digital dollar as the first phase of a multi-phase journey. The team will engage with economists, technologists, lawyers, academics, consumer advocacy groups, human rights experts, and ethicists. Over the next several months the team will consider potential designs and proposals along with a multi-step plan to pilot, test, learn, and enhance needed digital dollar capability. The pace and direction of the program will be determined by a governing body that will be proposed along with the completion of the first phase of work. At the end of the first phase, the team intends to present its findings to key stakeholder groups and policymakers and begin consideration of possible future phases to expand the pilot and formalize a broader approach.

Requirements and design sessions are underway and select key stakeholders will be invited to join a series of workshops over the coming months. The team plans to share more information about the proposed designs and plans in the late first half of 2020 at which time public comments and contributions will be invited.

This website uses cookies to improve your experience while you navigate through the website. Out of these, the cookies that are categorized as necessary are stored on your browser as they are essential for the working of basic functionalities of the website. We also use third-party cookies that help us analyze and understand how you use this website. These cookies will be stored in your browser only with your consent. You also have the option to opt-out of these cookies. But opting out of some of these cookies may affect your browsing experience.
Necessary Always Enabled
Necessary cookies are absolutely essential for the website to function properly. These cookies ensure basic functionalities and security features of the website, anonymously.
Functional
Functional cookies help to perform certain functionalities like sharing the content of the website on social media platforms, collect feedbacks, and other third-party features.
Performance
Performance cookies are used to understand and analyze the key performance indexes of the website which helps in delivering a better user experience for the visitors.
Analytics
Analytical cookies are used to understand how visitors interact with the website. These cookies help provide information on metrics the number of visitors, bounce rate, traffic source, etc.
Advertisement
Advertisement cookies are used to provide visitors with relevant ads and marketing campaigns. These cookies track visitors across websites and collect information to provide customized ads.
Others
Other uncategorized cookies are those that are being analyzed and have not been classified into a category as yet.
SAVE & ACCEPT